Brooke is heading home to Halifax today so I am all by my lonesome for today’s tea (hopefully I can make it interesting for you!) So without further adieu let’s get to it! 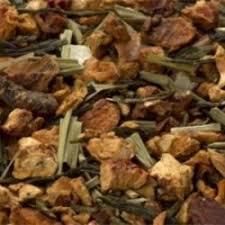 Description: Remember the summer you spent in Italy? Sipping espresso on the terrace, catching a ride on the back of a stranger’s Vespa, and of course, trying your first taste of tart, creamy lime gelato. With its fresh, fruity aroma and smooth flavour, this deliciously creamy mix of fruit and green tea will bring you right back. Try it iced. On a terrace. While the moon hits your eye.

Stacey: Mmm. I tend to not like lime desserts, but this is really nice! The lime is very subtle. Quite the tasty treat! It’s so odd just thinking to myself. Maybe I should talk out loud?

Stacey: I really this tea! *looks around at empty apartment.*

MK: Brooke wants me to text you in depth about the tea. So I woke up as groggily as humanly possible.
Stacey: Oh thank god!
MK: Last night I dreamed a favourite band was attacking a tea farm.
Stacey: Oh?
MK: Anyway, I wandered downstairs and found that no one was home. Feeling slightly abandoned, I opened the window and saw that it was Lime Gelato. I struggled to get it open but when I finally did I thought, “oh no, lemongrass”. But I smelled it and was quite impressed. I also tried to pour the water into one cup and then into another but the first cup had floaties (I then cursed the person who didn’t clean the cup).  It better be good after this struggle.
Stacey: I think you’ll like it!

MK: Hmm, I think it lives up to its name. My brother said it smells like lime pudding (does such a thing exist?). First bit of the sip is creamy, but then the lime hits the back of your tongue. I don’t know if I would drink it everyday but I like it.
Stacey: Agreed! I was pleasantly surprised by the mix of flavours, there’s apple and pineapple in there!
MK: Oh, apple?! I would never have known! They seem to throw that into everything…makes me suspicious because sometimes you can really taste it and other times you can’t. So what exactly do they do to these apples, why the difference?
Stacey: Yeah, DAVIDsTEA is quite sneaky…
MK: I think I’m impressed when a tea is creamy without the cream.
Stacey: Yeah…I wonder how they do it…
MK: Me too. Secretssss! However, I doubt I’m going to be mixing my own tea concoctions any time soon, so DAVIDsTEA can keep their secrets. Although, I wonder how someone even gets on that career path…

While MK and I were wondering about DAVIDsTEA’s secrets, Brooke was able to sit down with family Halifax to review the tea:

Brooke: What does it smell like Mom?
Cathy: Well, I wouldn’t say I smell lime if I didn’t know that’s what was in it! Did I tell you that I like my teas cooler? I don’t like them hot at all, I can suck it right back when it’s cooler. Don’t say suck!
Brooke: Dad, do you want to try?
Stewart: No, no, I’ll pass.
Cathy: Oh! But you like main squeeze and this is citrusy! And it only steeped for 4 minutes!
Stewart: Alright, okay. Oh, that’s pleasant and refreshing! I like the tanic tang of a black tea so I’m not being drawn to this one though.
Brooke: You guys are talking too fast!

Stacey: This is quite a tasty treat. I am pleasantly surprised the line was lovely and saddle. And yeah really free but also works as a heart. To you I was really would be bad. Yeah everything electrical.

Well folks, although I thought I would be all on my own today, turns out lime gelato really brings people together. What did you all think?

Until next tea,
Stacey (and MK) and Brooke (and Cathy and Stewart)

a basket full of puppies just for kicks! Because puppies!